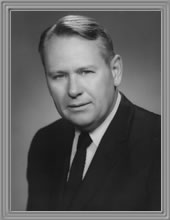 The 83rd President of the Bar of Texas was Buster Cole of Bonham. Before being elected to the presidency in 1963, Cole had served as chairman of the Board of Directors and as vice-president. In addition to the State Bar, Cole belonged to the American Bar and Fannin County Bar Associations and was a member of the A.B.A.'s standing Committee on Education about Communism. As President of the State Bar of Texas, he initiated the establishment of the "Lawyers' Weekly Letter," supported the continuation of legal-education endeavors by the Bar, and strengthened the Texas Bar Foundation.

Buster Cole was born in Saltillo, Hopkins County, Texas, on November 28, 1911, to Virgil E. and Nettie B. Cole. He graduated from Hardin-Simmons University with a B.A. degree in 1932; and after studying law privately for a year or so, he was admitted to the Texas Bar in 1933. He began his law practice in Bonham, later working with Cunningham, Cole & Southerland and then Cole & Moss. From 1935-1939 Cole served as county attorney, which at that time was the sole prosecuting official in Fannin County. He was a Baptist, a Democrat, and a Mason. He married Lena Mae McClure in 1936, and they had one son and one daughter.

During World War II Cole entered the U.S. Army in 1942 as a private. For about two years he was stationed in England and Iceland as an intelligence agent with the old C.I.C. In the early part of 1944 he attained the rank of staff sergeant and was selected to attend the Judge Advocate Candidate Officers School at the University of Michigan in Ann Arbor. He graduated as a first lieutenant and then served for a while as an associate judge advocate at Fort Hood, Texas. Late in the war he was transferred to the Judge Advocate General Department in New Delhi, India, and remained there until his discharge in 1945. Cole died on January 20, 1988.