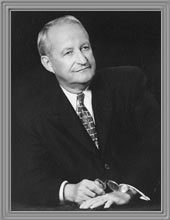 Angus G. Wynne Sr., was elected 59th President of the voluntary Texas Bar Association in 1939. When the State Bar Act became law in 1940, he became the first President of the new integrated State Bar of Texas. Born in Wills Point, Texas, on January 12, 1885, Angus Wynne was the son of attorney William B. "Buck" Wynne. From 1901-1909 Wynne attended Tyler Commercial College and the University of Texas, except for a one-year break when he worked in Washington, D.C., as a secretary to Texas Congressman Gordon Russell. After studying at the University of Texas law school, Wynne was admitted to the Bar in 1909 and began his practice in Wills Point. He subsequently lived in Kaufman and Longview; and after he moved to Dallas in 1954, he continued to maintain his Longview office.

Wynne and his wife Nemo had two sons. Four members of Wynne's family (himself, his father, and two brothers, B.J. and Toddie) were admitted to practice before the U.S. Supreme Court on the same day, which was a record for the Supreme Court. A third brother Gordon and a nephew of Wynne were also lawyers. In 1969 Wynne established an endowed professorship at the University of Texas in memory of his father who died in 1937; and Wynne himself later received the same honor when his son, Angus G. Wynne, Jr., established a professorship in his name.

Known as "one of Texas' most colorful and greatest trial lawyers," Wynne served on the State Bar Rules Committee in 1952-1953. He was a member of the American Bar Association for 50 years and served on its House of Delegates. Wynne was chairman of the Texas Supreme Court Advisory Committee, a trustee of the Southwestern Legal Foundation, a Fellow of the American College of Trial Lawyers and the Texas Bar Foundation, and chairman of the University of Texas Development Board until 1967 when he was named trustee emeritus. He was one of the seven founding incorporators of the U.T. Law School Foundation in 1952. He belonged to the Masons, the Elks, and Phi Kappa Psi fraternity. Wynne died in Dallas on December 16, 1974.