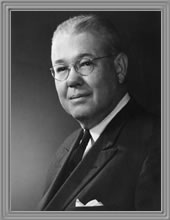 Albert P. Jones served as State Bar President in 1950-1951. He activated and supported the revision of the Texas Business Corporation Act which was passed by the Legislature in 1955. The State Bar under Jones' leadership adopted for the first time a program of Legal Aid Clinics in all financially viable localities; and due to the increase in Bar fees and Jones' strict fiscal policies, the Bar ended the year with a surplus that enabled Jones to recommend new capital expenditures to his successor. Jones was a member of the Houston and American Bar Associations. He was Houston Bar treasurer in 1944-1945 and director in 1946-1947. He served as a director of the State Bar in 1948-1950 and as a delegate to the 5th Circuit Judicial Conference in 1956-1962. In 1963 he was First Assistant Attorney General of Texas, and in 1951 became a member of the Texas Supreme Court's Advisory Committee on Rules of Civil Procedure.

Jones was born in Dallas on July 19, 1907, to Dr. Bush and Ethel H. Jones. He earned his B.A., M.A., and LL.B. degrees from the University of Texas, where he was a member of Phi Beta Kappa and Phi Delta Phi fraternities, Friar Society, Chancellors, and Order of the Coif. He was editor-in-chief of the Texas Law Review in 1929-1930. Jones was admitted to the Bar in 1930 and began his practice of the law in Houston. In 1962 he moved to Austin but returned to Houston in 1977. An Episcopalian, Democrat, and Mason, Jones was a Fellow of the American College of Trial Lawyers, a life member of the American Law Institute, and a Professor of Law Emeritus at the University of Texas where he taught from 1962-1977. He was president of the Texas Law Review Publications, Inc., in 1971-1974 and belonged to the Order of Barristers, American Judicature Society, and Southwestern Legal Foundation. He wrote a number of legal books and articles. Jones married Annette Lewis in 1936 and has two sons, one of whom became an Austin attorney. Jones died on September 9, 1992.