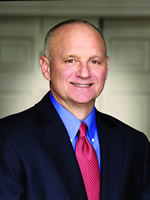 AUSTIN — The State Bar of Texas Board of Directors voted on Friday to hire E.A. “Trey” Apffel III of League City as the next State Bar executive director. Apffel was elected with 42 votes. Another applicant received one vote. One voting member abstained.

“Our search committee overwhelmingly believed Trey was the right choice for the position at the right time, and our board overwhelmingly agreed,” State Bar President Tom Vick said. “He has extensive knowledge
of the workings of the bar and will work productively with our members and staff to advance our mission of serving Texas attorneys and the people of our state.”

A former State Bar of Texas president, Apffel is the owner and principal of the Apffel Law Firm, where he focuses on personal injury litigation, toxic torts, and medical malpractice. His practice also includes family law and divorce. He has practiced in Galveston County for more than 30 years. Apffel will begin his new position on December 1.

The State Bar’s Executive Director Search Committee nominated Apffel this month after an extensive search that included more than 140 expressions of interest from individuals across the country. The committee nominated Apffel after in-person interviews with seven finalists. The Board of Directors affirmed the committee’s nomination Friday during a meeting in Lubbock.

The Board of Directors in April appointed the search committee, a diverse group of private citizens, people with significant experience in hiring executive leadership, members of the State Bar board, and other members of the bar. A committee roster is available at texasbar.com/ed-search.

Apffel is a member of the Galveston County Bar Association and served as the organization’s president in 1996-1997. He is an associate of the American Board of Trial Advocates and a director of the Texas Trial Lawyers Association.

Media note: A high-resolution photo of Apffel is available upon request.