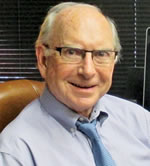 Longley received 53.41 percent of the 30,138 votes cast while opponent Chad Baruch of Dallas received 46.59 percent. Longley will serve as president of the State Bar of Texas from June 2018 to June 2019.
Longley has been prolific throughout his legal career in helping pass laws that benefit lawyers and their clients.

In 1973, Longley co-authored and nurtured the passage of the Texas Deceptive Trade Practices-Consumer Protection Act, together with the private remedies sections of Article 21.21 (now Chapter 541) of the Texas Insurance Code. Since then, he has co-authored Chapters 542 (prompt pay) and 544 (unfair discrimination) of the Insurance Code, the Texas Fair Debt Collections Practices Act, the Texas Home Solicitation Act, and landlord-tenant protections.

Longley has authored numerous seminar papers, taught insurance law at the University of Texas School of Law, and served on the State Bar of Texas Board of Directors, the District 9 Grievance Committee, and as chair of the State Bar Consumer Law Section, now called the Consumer and Commercial Law Section. In 2011, he received the State Bar Insurance Law Section’s Insurance Legend Award.

Longley and his wife, Maggie, have three grown children and five grandchildren.
Other runoff results:
State Bar Board of Directors:
For the District 4, Place 4 seat: Dinesh H. Singhal received 53.39 percent of 5,671 votes cast, winning the seat over Cynthia Owens, who garnered 46.61 percent of the vote. Both Singhal and Owens are from Houston.
Texas Young Lawyers Association Board of Directors:
In District 8, Place 1, Meagan T. Harding received 50.31 percent of the 819 votes cast, while Katherine “Katie” Fillmore earned 49.69 percent. Both Fillmore and Harding are from Austin.

In District 9, Matthew L. Czimskey of Waco received 57.73 percent of the 97 votes cast, and Savannah Stroud of Killeen received 42.27 percent.

The initial election took place April 3-May 2 and a runoff election was held May 11-25 for races in which no candidate received a majority of the votes. Detailed election results are available at texasbar.com/election.

Media note: A high-resolution photo of Longley is available upon request.
— — —